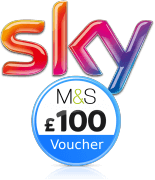 Enter our contest to win one of ten new Sky Hub routers!

Sky Broadband recently launched the new Sky Hub, which claims to be the router with best wireless range of any major provider, based on an independent study. The Hub offers Sky Smart Signal technology which constantly scans for interference in the home and selects the best wireless signal available. It also provides easy WiFi Protected Setup for WPS enabled devices.

Sky+ customers will be able to connect the Sky Hub to their Sky+ Box to access Sky's new On Demand entertainment services, which can also be accessed when out and about with the help of the Sky Cloud WiFi app.

The Sky Hub is provided to new customers as an inclusive part of their Sky Broadband package. Existing Sky Broadband customers can upgrade to the Hub for an introductory price of £39.

We also managed to get our hands on ten Sky Hubs and five Sky Wireless Connectors to give away in a competition that ran until the 6th of December. The lucky winners will hear from us by the 13th of December.

October 2012 saw average download speeds recorded by users of our Broadband Speed Test rise in comparison to the results from September's result, coming in at 18.04Mb. Average upload speed remained stable at around 2Mb.

The best performing non-fibre-based provider was again BE and O2 (who share a common infrastructure) in at 5th place with 7.33Mb average download speed over their Local Loop Unbundled ADSL2+ service.