News stories relevant to broadband in the United Kingdom.

Posted by Edd Dawson on 2014‑04‑24 18:33 in AnnouncementsNewsHyperopticVirgin Media

As the top broadband speeds increase, new marketing terms like ultrafast, hyperfast and gigabit broadband are becoming commonplace. We understand how confusing terms like this can be, especially when most broadband buzzwords all seem to be another way of saying 'very fast', so we've produced a new guide to ultrafast and hyperfast broadband that should help to answer all your questions.

Meanwhile hyperfast broadband provider Hyperoptic has started to install their gigabit fibre to the building services outside of London, with select apartment buildings now activated in Bristol, Cardiff and Reading. These join over 250 postcode areas already hooked up in London, with more added every day. Hyperoptic offer the UK's fastest broadband at up to 1Gb (or 1000Mb) making this a truly hyperfast service, what's more their connections are symmetric offering the same speed regardless of whether you're downloading or uploading. You can sign up for a gigabit service for only £25 per month for the first 6 months.

If you only need ultrafast speeds, Hyperoptic also offer 100Mb broadband with prices comparible to Virgin Media's, from only £12.50 for the first 6 months, however these offer an unprecidented 100Mb speed for uploading, while Virgin only offers 6Mb uploads for the same price. Fast upload speeds are extremely useful to content creators and for users of could services. There's a section of our guide dedicated to ultrafast and hyperfast upload speeds.

If you're not sure whether Virgin Media or Hyperoptic's services are available in your area, our broadband checker will tell you if either are serving your postcode and will allow you to compare their prices and features with other broadband suppliers.

All prices quoted are introductory offers that require montlhy line rental. Hyperoptic charge £12.50 for line rental and Virgin Media £15.99. All services mentioned are also available without any telephone line installed at your home. Hyperoptic charges £40 for setup, or more if your home doesn't have a faceplate preinstalled. Virgin Media is currently offering free installation as a limited offer.

Broadband.co.uk has secured an exclusive £70 Amazon.co.uk gift voucher offer on all EE Home Broadband deals. This offer combines with EE's existing offers, including:

To qualify for the voucher, simply enter the code EEHBB70 when you sign up online. This offer is only available until the 6th of April, so be sure to take advantage while you can!

EE's headline speed for standard broadband has also recently increased from 16Mb to 17Mb thanks to traffic shaping to prioritise web and streaming traffic at peak times, making EE the fastest phoneline broadband on the market.

Voucher only available online. Line rental required, available from £11 monthly equivalent price if paid a year upfront. Quoted prices and features may only be available in EE network areas. Speed achieved depends on factors such as your distance from the telephone exchange, you will be provided with the fastest connection available. Full details will be provided before you sign up. 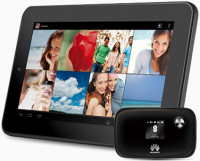 As a limited special offer EE are offering free 7-inch Android tablets with many of their superfast 4G mobile broadband deals. Just choose a data allowance of 5GB or more on a 24 month contract and, as well as either a USB dongle or mobile WiFi device, you'll receive the Alcatel One Touch 7 Android WiFi tablet at no extra cost!

Prices start from £21 a month and available usage allowances go up to 50GB per month. What's more, these deals all come with EE's new double speed 4G, the fastest mobile broadband available in the UK, with the most 4G-enabled cities!

All EE mobile broadband packages come with extra bonuses: you can enjoy inclusive WiFi at BT hotspots and London Underground coverage from Virgin Media, and free film downloads and 2 for 1 Wednesday cinema tickets with EE Film.

Superfast 4G speed depends on location and number of users. Data outside your monthly allowance can be purchased for £6 for 500MB or £15 for 2GB. Prices may increase during the life of your plan.

TalkTalk's great value TV bundles, which include phone services, truly unlimited broadband and TV services with Freeview, YouView, catchup TV, on demand and extra channels are now even better value with a promotion offering 2 months half price on the Entertainment Boost!

For only £10 extra per month, the Entertainment Boost adds an additional 33 channels to your TV service, including Sky 1 and 2, Sky Living, FOX, Universal, Watch, GOLD, Comedy Central and Discovery. And now for a limited period, you'll get your first two months of the boost for only £5 per month!

The boost is compatible with both of TalkTalk's TV bundles:

Other boosts are available adding up to 65 channels that aren't available on BT TV. You can also add Sky Movies and Sky Sports, with 5 decidated sports channels and 11 movie channels available.

TV services are available to both new and existing TalkTalk customers. Boosts can be added or removed on a monthly basis, just give 48 hours notice to remove a boost. Line rental is required, save by paying for a year up front, equivalent to £9.50 per month.

Moving house is a headache, and involves a lot of paperwork, phone calls, and stress even without needing to worry about moving your broadband with you. You could always switch your supplier...but this will subject you to extra setup and cancellation fees, and ultimately prove no less of a hassle. Thankfully, TalkTalk provide a Home Move Service to make this go a lot more smoothly for you. It's all done online, so you can do it at a time to suit you, track the status of the move, and change dates if there are delays. It's also fast, if you have all the details ready already, and if you do the installation yourself, it's free. TalkTalk Home Move Service is there to make moving house that little bit simpler.

Find out more with our handy guide below.

A guide to TV options: TalkTalk TV vs Freesat Freetime vs Freeview+ HD

With so many choices for TV packages available for consumers today, it can be hard to decide just what's right for you. Options range from the minimal cost services, like Freeview, all the way up to the expensive multimedia packages with all the bells and whistles from Virgin Media and Sky. If you're looking for something with more options and flexibility than Freeview, but still cheaper than Virgin Media and Sky, then TalkTalk TV may be the solution for you. Check out our handy guide below.