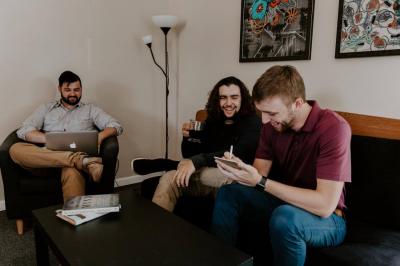 Fast, reliable broadband is a must-have for any student house. And given that it can take a couple of weeks to set up, it's one of the first things you'll want to get sorted when you move in for the new term.

If you haven't signed up for your own broadband package before, we'll tackle some of the questions you might have here.

It's all pretty straightforward, but as a student you won't have quite as many options as everyone else. Contract length is absolutely vital - you don't want to be saddled with a long term deal that you have to keep paying for during the summer holidays or beyond.

And with all the corona-driven uncertainty this year, flexibility is more important than ever. Let's take a look at some of the things you need to know.

Your usage is probably going to be pretty high, so the fibre deals in the 60-67Mb average speed range should be your starting point.

You might get away with one of the slower fibre packages if there's only two people in your house, but in most cases the extra speed will be worth more than the fiver or so difference in price.

Faster is always better, of course, and you might be lucky enough to be living in an area where you can get speeds over 100Mb - and sometimes quite a lot more. These might come from the normal fibre providers like BT or Sky, from Virgin Media, or in 5G areas through the likes of EE and Three. Just make sure you keep an eye on the contract length and any setup fees for these faster deals.

What length contract should you get?

Short contracts are key for student broadband, so don't even consider those that need an 18 or 24 month commitment.

12 months is the longest you should go for, but even then you'll end up with quite an overlap with the summer break where you're still paying for your internet while you're hitting the beaches in Spain. Don't rule these out entirely, though, as they might still work out cheaper than a shorter option.

BT offer a few nine month deals that align much better with your term time. Some broadband suppliers, including NOW Broadband and Virgin Media, also offer 30-day rolling contracts that you can cancel at any time. These are best for zero-commitment broadband, but they do often come with significant setup fees. Be sure to factor that in when you're comparing prices.

Do you need any extras?

If Netflix isn't enough and you want a bit of sports action or some more of the latest US shows, you can save some money by adding a pay TV plan to you broadband deal. You won't be able to do this through Sky, as they only offer TV on an 18 month contract, but you can get 30-day deals on NOW TV streaming with NOW Broadband.

For any overseas students in your house, consider adding a call plan with support for cheap international calls.

Who pays the bill?

Even though you'll be splitting the bill with all your housemates, one of you is going to have put their name on the contract. It will be their responsibility. This is one of the reasons why you don't want to sign up to anything longer than 12 months, tops. You don't want to be stuck paying your broadband bill long after your housemates have moved on.

It's a good idea to assign each one of your utilities to a different person in your household so you share the risk. To help manage bills you can also look into setting up a shared bank account across the household, or take a look at apps like Splitwise that make it easier to see who owes what.

So, what student broadband deal should you choose?

BT offer three plans specifically for students. They're nine month deals, with speeds ranging from 36Mb to 67Mb. You can add a Sports or Entertainment TV package, as well as call plans including cheap international calls to 236 countries.

For one month contracts, you've got two main choices:

Your other options are for 12 month contracts. When you add in the setup fees and slightly higher prices for short deals, these year-long plans may still end up being competitive, even though you'll still be paying in July and August when you don't need it. Among your best options here are:

And there's one last thing to consider - broadband over 4G or 5G. This won't be right for everyone: 4G speeds are better for one or two users rather than a large, heavy-use household, and though 5G is blazing fast it still has very patchy coverage. If you're in the right part of London, Three's 5G Home Unlimited plans look good, and include a 12 month option. Find more great mobile broadband deals here.

Ready to start shopping for student broadband? Use our postcode checker to compare the best broadband deals available in your area today.