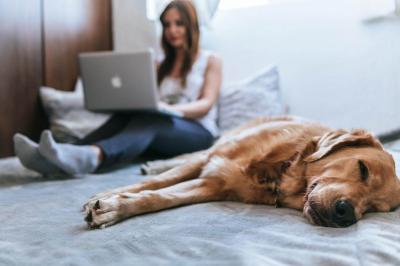 With millions of people now having to work from home there's been a lot of speculation about whether the UK's broadband infrastructure will be able to handle a massive surge in demand.

Well don't worry, because the expectation is that it can. That's the word from BT, who say they've got "more than enough capacity…to handle mass-scale home-working in response to COVID-19".

Last week, the company shared some data to demonstrate just how well their network was able to cope with higher levels of usage. They showed that in the previous week a couple of major video game releases and Champions League football had combined to hit new record levels of traffic for BT - to the tune of 17.5 terabits per second (Tbps) - without the network buckling under the strain.

The increase in home working meanwhile, has seen daytime traffic increase by as much as 60%, but still remains well below the record at around 7.5Tbps. Of course, with schools now closed, it's likely that traffic will go up further during the day, but the industry is confident that it will be able to handle it.

Our own speed test data, compiled from thousands of speed tests each month, supports the view that broadband connections aren't slowing down as well. We pulled the average home broadband speed results from the middle of February, and they were 44Mbps. The period between the 8th and the 14th of March saw average speeds of 43.9Mbps, while between the 15th to the 23rd of March, average speeds were 44.7Mbps. The speed differences displayed are of no real significance, and we're happy that people shouldn't be seeing any negative impact on their connection, despite the current change in UK working arrangements.

Are you working from home? Check out our tips on how to minimise disruption to your broadband service, and make sure it's good enough for what you need.

To help things along, TV streaming companies have agreed temporary measures to slash the amount of data they use by as much as a quarter. Netflix, Amazon and Disney+ are streaming their content at a lower bitrate, while YouTube now defaults to an SD stream - although you can still manually set videos to play at a higher resolution if you want to. The BBC also seems likely to make a change in the not too distant future.

Will you notice the difference? Possibly not, although it depends what you're watching. Streaming at a lower bitrate means that the video is more heavily compressed. With the way video compression works it's more noticeable in busy scenes with lots of fast movement, where the image may become blocky or distorted. In slower scenes, you'll have to look pretty closely to see any effect.

As for streaming in SD, as with YouTube, that might not look great if you watch on a massive 4K telly, but for viewing on a smaller screen like a tablet it should be just fine.

How to pause your Sky Sports and BT Sport subscriptions

In other news, Sky and BT have taken the decision to allow customers to pause their sports channel subscriptions for as long as there's no actual sport taking place. You can do this at sky.com/pausesport or at bt.com/tv. Unfortunately, you can't pause these channels if you've got them through Virgin Media.

BT have removed data caps on all their broadband products. This won't affect most people, since most of their plans are already unlimited. But if you're on an older deal you'll no longer have to worry about managing your usage.

And lots of broadband providers have issued statements to explain their COVID-19 plans, including what happens if you need a callout from a technician to solve a problem. You should have received this via email, but if you haven't you can read them online from BT, Sky, Virgin Media, EE, Vodafone and Plusnet.