An ultrafast full fibre broadband provider based in the South West 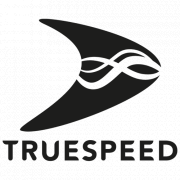 Sometimes the best way to get a feel for a broadband provider is to read what those who are already customers think of the service they're receiving. Below are all the reviews we've received for TrueSpeed.

The reviews published on this page are those of the individual authors who have warrantied that they abide by our review guidelines. Reviews are not the opinion of Broadband.co.uk.

Is it time to upgrade to ultrafast broadband?

With the upgrade to our broadband infrastructure being accelerated, ultrafast broadband is becoming more accessible with each passing day.

So you might now be wondering, is it time to upgrade to a faster deal? But what exactly do you get, and what are the benefits to ultrafast broadband? Let's take a look.

What is ultrafast broadband?

Anything with a download speed over 100Mb can be classified as ultrafast.

There are a lot of different technologies that are able to deliver these faster speeds, including upgraded street cabinets that use the G.fast technology, Virgin Media's cable and fibre network, and the growing number of full fibre, or fibre-to-the-home, services that are being rolled out across the country.

Coverage is still quite patchy, but a majority of UK homes can get an ultrafast service from at least one provider, with as many as 59% able to get speeds of at least 300Mb.

Do you need ultrafast broadband?

While faster is very much better, the normal fibre broadband connections that most of us still use are extremely capable.

A 67Mb connection is good enough to allow you watch Netflix or Amazon Prime in 4K, and can download a 1GB file in just a touch over two minutes. You shouldn't experience too much in the way of problems, even with a fairly busy household.

But remember, your available bandwidth is divided between all the devices connected to your network. The more devices you add, the more likely you are to experience slowdowns on some of your tasks - your videos drop to a lower resolution, your downloads take longer, and so on. Ultrafast broadband reduces the chances of this happening, and the faster your connection, the less likely it gets. It allows you to connect more devices, and more people, without putting any limits on what they can do.

So while you might not have a desperate need for ultrafast, right now, there are lots of good reasons why it will benefit you.

Can you get ultrafast broadband?

The provider with the widest ultrafast broadband coverage throughout the country is Virgin Media. They're available to approaching two-thirds of the UK and they offer speeds up to an average 630Mb. Vodafone, EE and Sky are among the other big providers that can offer ultrafast broadband at varying speeds.

There's also a big growth in the number of specialist full fibre providers, some focussing on specific regions. These include Community Fibre in parts of London and TrueSpeed in the South West, while Gigaclear target rural areas in 22 counties across the Midlands and south of England. Coverage is improving all the time, as are the range of options available to everyone.

Are you ready to upgrade to ultrafast broadband? Use our postcode checker to find out if it's available in your street already.

TrueSpeed Broadband Buyers Guide - Is TrueSpeed right for you?

Can I get TrueSpeed broadband?

TrueSpeed are a full fibre-to-the-home provider based in the South West.

They've rolled out their network to over 200 communities, including many small towns and rural areas. They're looking to expand their network further throughout the region, with Bath among the places on their list.

Use our postcode checker to see if TrueSpeed is already available where you live.

In all likelihood you won't be able to get TrueSpeed right now. However, it is a demand-led service, so if you're in the region and there's enough interest within your local community you may be able to get it installed.

Here's how it works. First, you register your interest on the TrueSpeed website, and encourage the rest of your community to do the same. When enough people have come on board - with no commitment at this stage - TrueSpeed will arrange a Q&A event in your area, after which you can all start signing up. Once the community target has been reached - 30% of the local population - they'll begin building the network. From this point, you could be up and running six months later. You can sign up even if you're still in contract with another provider, and you won't be connected until that deal ends. The costs of building the network are covered by the government's Broadband Delivery UK Scheme.

TrueSpeed are a civic-minded company that also provide free broadband to local schools and community hubs in the South West region.

The service is symmetric, which means that the upload speeds match the download speeds. The deals you can choose from are:

All the deals are fully unlimited, so you can download or stream as much as you like. They're on 18 month contracts, with free installation.

The phone service you get with each plan is a VOIP service, where your calls are made over the internet. This means that it won't work in a power cut - you won't even be able to contact the emergency services. You can port your existing number if you want to keep it, and you can also add a range of call plans for as little as £2.99 a month:

The three TrueSpeed broadband plans give great speed options for all levels of user.

TrueSpeed describe their TrueSpeed 80 as being for light internet use and individual users. It can handle a lot more than that - it's faster than the majority of fibre packages in the UK. Most fibre-to-the-cabinet services average download speeds of around 67Mb, with upload speeds only around of what this TrueSpeed deal offers.

TrueSpeed 350 is a big upgrade over what you can get from most providers and is ideal for a large family with heavy internet use, including lots of streaming and video game downloading. Upload speeds are good too, so it could be a good choice for anyone working from home.

TrueSpeed 900 is more expensive and a lot faster. Most households won't yet need that kind of bandwidth, although our internet use is not going down so it does provide a good level of future proofing over the course of the 18 month contract. Given the price difference, don't feel compelled to buy the faster service simply because it is better. Weigh up how much your household uses the internet at any one time, and pick the speed that best fits your needs.

Like all full fibre providers, the TrueSpeed installation process is more hands-on than it is for a normal fibre service. You need an engineer to do it, and they'll need to drill a few holes and connect some cables. Installation takes 90 minutes. The TrueSpeed router also needs to be wall-mounted, so think in advance where you want it. This can also have implications for the Wi-Fi signal throughout your home - especially if you have a large house - so have a chat with TrueSpeed's support team if you have any concerns.

It's good to know exactly what you get before you sign up. In the case of TrueSpeed, it's a pretty no-frills service as far as extras are concerned.

What are the benefits of TrueSpeed?

Here are some of the best reasons to choose TrueSpeed as your next broadband supplier.

What are the drawbacks of TrueSpeed?

Nothing's ever perfect, so what are some of the possible downsides to choosing TrueSpeed?