Full fibre rollout across the UK set to speed up 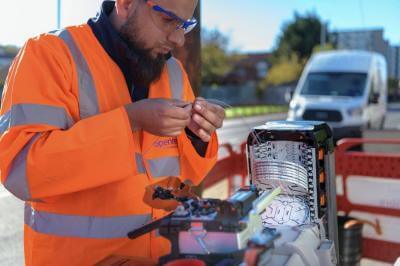 The rollout of full fibre broadband across the UK is set to be ramped up following a series of major new announcements. They form part of the Government's ambition to bring gigabit-capable broadband to the whole of the UK over the next few years.

This biggest announcement is from industry watchdog Ofcom. They've decided that they won't impose price caps on full fibre connections from Openreach, the BT-owned company that runs the bulk of the UK's broadband infrastructure.

While the prices they can charge to their customers - broadband suppliers like Sky and TalkTalk, as well as BT - have traditionally been capped (and often reduced) by Ofcom for slower fibre connections, there was a concern that doing so for the new fibre-to-the-home network would discourage investment. So they've decided to allow Openreach to set their own prices.

BT responded by confirming their commitment to invest £12 billion into the full fibre infrastructure, with a plan to bring faster broadband to 20 million homes by the end of the decade.

However, if Openreach can charge the broadband providers more for connections, some worry that those ISPs will have no choice but to pass on the costs to us, the users. And it is possible that full fibre will be more expensive, at least in the short term. Ofcom have introduced a number of measures to try and minimise the impact.

While the BT investment will help to accelerate the rollout of full fibre broadband across the UK, it will only cover around three million homes in rural and more remote areas, where broadband infrastructure is already lacking. These hard to reach areas, which are not commercially viable, will be covered instead by public funding.

The Government pledged to spend £5 billion in the 2019 election campaign, and they've announced that the first £1.2 billion of this will be spent by 2024. The areas that will benefit from this money initially are Cambridgeshire, Cornwall, Cumbria, Dorset, Durham, Essex, Northumberland, South Tyneside and Tees Valley. Work will get under way next year.

After that, the next regions in line are expected to be Hampshire and the Isle of Wight, Norfolk, Shropshire, Suffolk and Worcestershire.

And on top of all that, the Government has also announced that they're revamping an existing voucher scheme that enables some households in rural areas to get subsidies to install full fibre broadband. Worth £210 million, it will be targeted at the most hard to reach areas, along with a further £110 million to help bring full fibre to GP surgeries, schools and libraries in the same sorts of areas.

As of the end of last year, 18% of the UK - around 5.1 million premises - had access to full fibre broadband, an increase from 10% a year earlier. The growth has seen the emergence of some new, regional broadband providers, like Community Fibre in London, or TrueSpeed in the South West, alongside the national players.

To see if you can get full fibre, or to compare the best broadband deals, use our postcode checker to see what's available where you live.